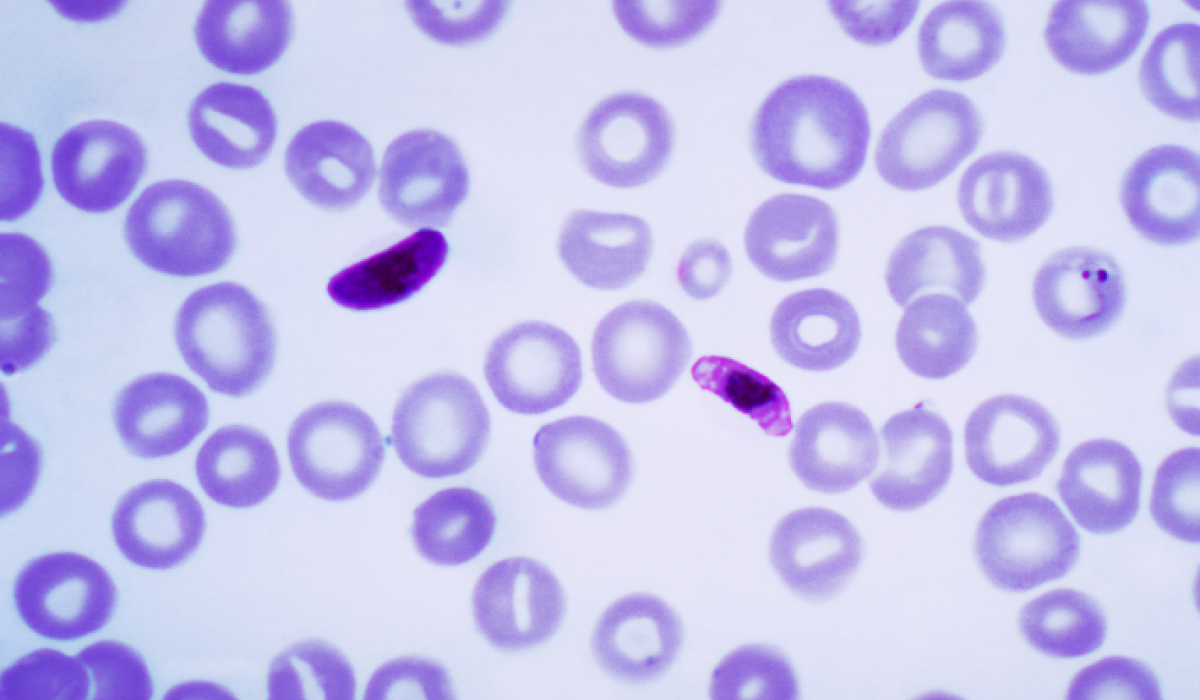 Plasmodium falciparum is a protozoan parasite, one of the species of Plasmodium that cause malaria in humans. It is transmitted by the female Anopheles mosquito. Malaria caused by this species (also called malignant or falciparum malaria) is the most dangerous form of malaria, with the highest rates of complications and mortality. As of 2006, there were an estimated 247 million human malarial infections (98% in Africa, 70% being 5 years or younger). It is much more prevalent in sub-Saharan Africa than in many other regions of the world; in most African countries, over 75% of cases were due to P. falciparum, whereas in most other countries with malaria transmission, other, less virulent plasmodial species predominate. Almost every malarial death is caused by P. falciparum.

A human parasite causing the malignant form of tertian (pernicious or malignant ) malaria, found in all continents.

Malaria is caused by an infection with protozoa of the genus Plasmodium. The name malaria, from the Italian mala aria, meaning "bad air", comes from the linkage suggested by Giovanni Maria Lancisi (1717) of malaria with the poisonous vapours of swamps. This species name comes from the Latin falx, meaning "sickle", and parere meaning "to give birth". The organism itself was first seen by Laveran on November 6, 1880 at a military hospital in Constantine, Algeria, when he discovered a microgametocyte exflagellating. Patrick Manson (1894) hypothesised that mosquitoes could transmit malaria. This hypothesis was experimentally confirmed independently by Giovanni Battista Grassi and Ronald Ross in 1898. Grassi (1900) proposed an exerythrocytic stage in the life cycle, later confirmed by Short, Garnham, Covell and Shute (1948), who found Plasmodium vivax in the human liver.

Around the world, malaria is the most significant parasitic disease of humans, and claims the lives of more children worldwide than any other infectious disease. Since 1900, the area of the world exposed to malaria has been halved, yet two billion more people are presently exposed. Morbidity, as well as mortality, is substantial. Infection rates in children in endemic areas are of the order of 50%: Chronic infection has been shown to reduce school scores by up to 15%. Reduction in the incidence of malaria coincides with increased economic output.

While there are no effective vaccines for any of the six or more species that cause human malaria, drugs have been employed for centuries. In 1640, Huan del Vego first employed the tincture of the cinchona bark for treating malaria; the native Indians of Peru and Ecuador had been using it even earlier for treating fevers. Thompson (1650) introduced this "Jesuits' bark" to England. Its first recorded use there was by Dr John Metford of Northampton in 1656. Morton (1696) presented the first detailed description of the clinical picture of malaria and of its treatment with cinchona. Gize (1816) studied the extraction of crystalline quinine from the cinchona bark, and Pelletier and Caventou (1820) in France extracted pure quinine alkaloids, which they named quinine and cinchonine.

The life cycle of all Plasmodium species is complex. Infection in humans begins with the bite of an infected female Anopheles mosquito. Sporozoites released from the salivary glands of the mosquito enter the bloodstream during feeding, quickly invading liver cells (hepatocytes). Sporozoites are cleared from the circulation within 30 minutes. During the next 14 days in the case of P. falciparum, the liver-stage parasites differentiate and undergo asexual multiplication, resulting in tens of thousands of merozoites that burst from the hepatocyte. Individual merozoites invade red blood cells (erythrocytes) and undergo an additional round of multiplication, producing 12-16 merozoites within a schizont. The length of this erythrocytic stage of the parasite lifecycle depends on the parasite species: irregular cycle for P. falciparum, 48 hours for P. vivax and P. ovale, and 72 hours for P. malariae.[6] The clinical manifestations of malaria, fever, and chills are associated with the synchronous rupture of the infected erythrocytes. The released merozoites go on to invade additional erythrocytes. Not all of the merozoites divide into schizonts; some differentiate into sexual forms, male and female gametocytes. These gametocytes are taken up by a female Anopheles mosquito during a blood meal. Within the mosquito midgut, the male gametocyte undergoes a rapid nuclear division, producing eight flagellated microgametes that fertilize the female macrogamete. The resulting ookinete traverses the mosquito gut wall and encysts on the exterior of the gut wall as an oocyst. Soon, the oocyst ruptures, releasing hundreds of sporozoites into the mosquito body cavity, where they eventually migrate to the mosquito salivary glands.

Plasmodium falciparum causes severe malaria via a distinctive property not shared by any other human malaria, that of sequestration. Within the 48-hour asexual blood stage cycle, the mature forms change the surface properties of infected red blood cells, causing them to stick to blood vessels (a process called cytoadherence). This leads to obstruction of the microcirculation and results in dysfunction of multiple organs, typically the brain in cerebral malaria.