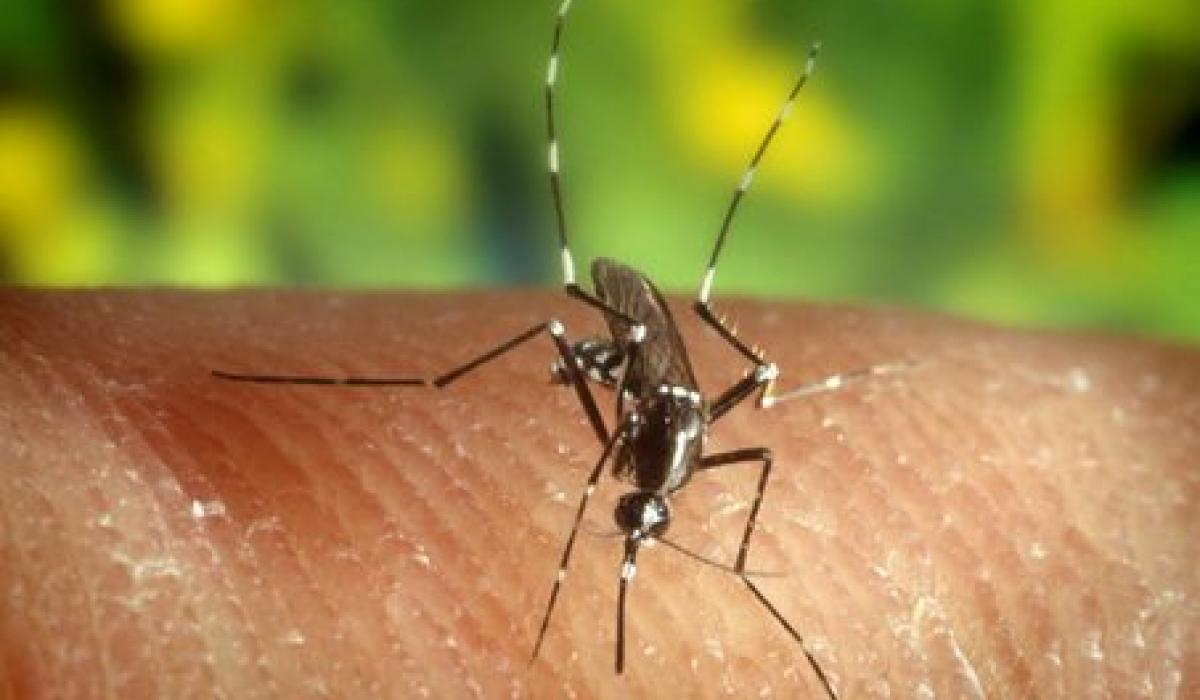 Anopheles quadrimaculatus Say is historically the most important vector of malaria in the eastern United States. Malaria was a serious plague in the United States for centuries until its final eradication in the 1950s (Rutledge et al. 2005). Despite the ostensible eradication, there are occasional cases of autochthonous (local) transmission in the U.S. vectored by An. quadrimaculatus in the east and Anopheles freeborni in the west (CDC 2005).

In addition to being a vector An. quadrimaculatus can also be a pest species (O'Malley 1992). This species has recently been recognized as a complex of five sibling species (Reinert et al. 1997) and is commonly referred to as An. quadrimaculatus (sensu lato) when in a collection or identified in the field. The preferred hosts are large mammals including humans.

Adults: Anopheline adults rest with their abdomens positioned at a discrete angle to the surface, whereas other species keep their bodies parallel to the surface, which makes them easy to identify when sitting on the skin (Rutledge et al. 2005). Species in the genus Anopheles have long palps equal in length to the proboscis. They are very dark mosquitoes covered in dark brown to black hairs. Anopheles quadrimaculatus has dark scales on the wings with patches of scales forming four darker spots on the wing (Carpenter and LaCasse 1955).

Eggs: Females deposit eggs individually on the surface of the water. Preferred oviposition sites include fresh water streams, ponds, and lakes with aquatic vegetation (Carpenter and LaCasse 1955). The eggs are unique in having floats on either side. The eggs of Anopheles quadrimaculatus cannot survive drying/desiccation; they will hatch within two to three days after oviposition (CDC 2004). However, Jensen et al. (1994) reported that sibling species C1, Anopheles diluvialis, have adapted to floodwater conditions and their eggs can survive 28 days out of water under favorable temperature conditions.

Larvae: The larvae lie horizontally at the surface of the water where they filter feed on organic material (O'Malley 1992). They do not possess the breathing siphon present in other mosquito genera. They obtain oxygen through the palmate hairs along the abdomen. The food sources include a variety of plant and animal matter suspended at the surface of the water and small enough to eat (O'Malley 1992).

Pupae: The pupae of all mosquitoes are active and when disturbed will "tumble" from the water surface where they obtain oxygen, to the bottom of the aquatic habitat. Even though they are active, the pupae do not feed as there are no functional mouthparts during this stage.

Like all mosquitoes, anopheline mosquitoes have four stages in their life cycle: egg, larva, pupa, and adult. The first three stages are aquatic and last five to 14 days, depending on the ambient temperature (CDC 2004). The adult females can live for over a month in captivity, but in nature most probably do not survive more than two weeks (CDC 2004).

Adult males and females feed on plant sugars and nectar for energy. The females also feed on blood to provide nutrients for the developing eggs. Anopheles quadrimaculatus will feed on mammals including humans, domestic and wild animals (Carpenter and LaCasse 1955). The feeding preference is principally for ruminants, equines, lagomorphs and canines (Jensen et al. 1996). Human blood-feeding rates vary with proximity to the larval habitat and resting sites (Jensen et al. 1996). In the limited research that has been done on blood feeding by the different sibling species, there have been no differences detected in the host preference (Apperson and Lanzaro 1991). When resting mosquitoes are collected indoors, the human blood-feeding rate can reach 93%; but when collected from non-domicile sites the maximum rate is 18% (Jensen et al. 1996). Feeding occurs at night. During the day, the adults rest inside dark buildings and shelters in dark corners. Flight activity peaks a short period after dark, with limited flight for blood for the remainder of the night and at dusk they search for resting sites (Carpenter et al. 1946). Flight range is usually regarded as less than one mile under normal conditions, but is capable of much longer flights as demonstrated by mark and recapture studies (Carpenter and LaCasse 1955).

Anopheles quadrimaculatus is more active in the summer months and exhibits slower development in the winter (Weidhass et al. 1965). Adult An. quadrimaculatus overwinter as fertilized females in colder climates. The overwintering adults stay in protected shelters such as barns, tree holes, and other dark protected areas (Magnarelli 1975). The number of broods varies by region with seven to eight in North Carolina, and nine to 10 further south (Carpenter and LaCasse 1955). Blood-feeding begins in the spring and declines in the fall, ceasing by November (Roberson et al. 1993).